An Enemy at Green Knowe by L.M. Boston 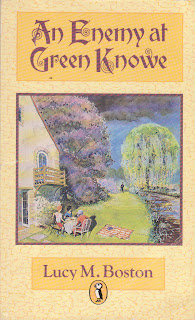 As a child, the only one of Lucy Boston's books I read was the first, The Children of Green Knowe. At the time I think I found it a little wordy, but it stuck in my head ever afterwards, so that it was with enormous pleasure that I've rediscovered the series as an adult - if I still have one left to read, it's because I'm rationing myself, because to begin one is to be lost in a world of enchantment. Old houses and gardens are equally beguiling, and a story which combines both is perfection. You can see a little of that enchantment, I think, in the cover illustration, which is by L.M. Boston's son, Peter, and shows the "real" Green Knowe, the manor at Hemingford Grey near Cambridge, which she bought in 1939. This is one of those instances where house and garden are characters as important as the people, and the stories all reflect the author's love for her surroundings and her home's imagined history. You can read some of that history here, in an interview with her daughter-in-law, Diana, who now runs the house.


In An Enemy at Green Knowe, Tolly, whom we met in the first book, and Ping, who was introduced in The River at Green Knowe, are spending a holiday with Tolly's grandmother, Mrs Oldknow. Soon after their arrival, Mrs Oldknow receives a letter from a Dr Melanie Powers, asking to visit the house to search for rare manuscripts associated with one of Green Knowe's earlier residents, the black magician Dr Vogel. Hard on the heels of her letter, Dr Powers turns up, and proves to be unpleasantly pushy and insinuating, not in the least prepared to accept that all Dr Vogel's books have been destroyed.  She quickly proves to be a very real threat and it takes all their combined resourcefulness to hold her at bay. 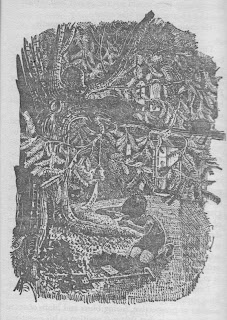 I've seen other reviewers commenting on how dark this book is compared to the others in the series. For me, that's not a negative, nor is the introduction of witchcraft. There are certainly places where you hold your breath with anticipation - Dr Powers is genuinely scary - but the frightening episodes are over quite quickly, and not protracted in the way they might be some more recent novels, or in a book aimed at slightly older children. There are minor victories along the way, allowing for bedtime readings which see Tolly and Ping secure within the walls of Green Knowe for another night, at least.

Peter Boston's illustrations are an essential part of the Green Knowe books - done on scraperboard, they are rather hard to reproduce here as the paper quality of my Puffin edition means that it doesn't scan well, but I think you can see the intricacy that makes you want to study the detail. They provide the perfect reflection of the delicacy with which the stories are told, and their deep sense of magic and history. The best of them all is The River at Green Knowe, and I'll talk about that another day, but they are all magical, and can all be read on their own, each creating a perfect world which welcomes and surrounds the reader.